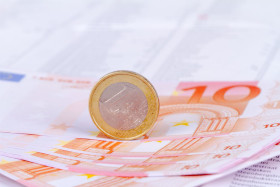 The euro was firm today, rising against most of its rivals, though posting losses versus the Great Britain pound and the New Zealand dollar. Yet not all fundamentals were positive to the currency, and it may face troubles extending rally for the rest of the week.
The market sentiment was positive on Monday as global stocks rallied. The good news headlines about the COVID-19 vaccine development also helped investors to maintain optimism. And that was helpful to the shared 19-nation currency.
As for macroeconomic data, Eurostat reported that industrial production rose by 4.1% in July on a seasonally adjusted basis in both the eurozone and the whole European Union. Analysts had predicted a bit smaller increase of 4.0% for the eurozone. The previous month’s increase got a positive revision from 8.9% to 9.3%.
The main headwind for the euro in the near future is likely going to be the Brexit and the progress (or rather lack thereof) in the trade deal negotiations between the United Kingdom and the European Union. European Central Bank policymaker and Irish Central Bank Governor Gabriel Makhlouf said today:

It would be wise to plan on the basis that there will not be a trade deal between the European Union and the United Kingdom.

Uncertainty about the pace and sustainability of economic recovery following the coronavirus pandemic is going to be an additional hurdle to the euro, weighing on the currency in the long term. Christine Lagarde, President of the European Central Bank, delivered a speech over the weekend, talking about problems that the recovery of the global economy will face, saying:

Global economic activity has begun to recover since mid-May as various measures put in place to contain the spread of the pandemic were eased. The recovery has been substantial â but it remains uneven, uncertain and incomplete.

She also said that the same applies to the eurozone:

For the euro area, a similar assessment applies. The incoming data show a strong recovery, but also one that is uneven, uncertain and incomplete.