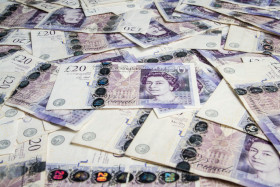 The Sterling pound today fell against the US dollar extending yesterday’s losses amid growing fears of a no-deal Brexit as both sides issue ultimatums. The GBP/USD currency pair has fallen for six of the past eight trading days as investors sell the pound as a hard Brexit appears very likely.
The  GBP/USD currency pair today fell to  a  low of  1.2763 before reversing course and  rallying to  a  high of  1.2865 and  was trading in  positive territory at  the  time of  writing.
The  currency pair fell yesterday after the  UK published its Internal Market Bill, which contravenes the  withdrawal terms it had agreed on  with the  EU. The  fact that yesterday’s emergency meeting did not yield a  positive outcome piled pressure on  the  cable. The  release of  the  downbeat UK monthly GDP estimate for  July, which came in  at  6.6% versus the  consensus estimate of  6.7% also dragged the  pair lower. The  upbeat UK industrial and  manufacturing production report for  July released by  the  Office for  National Statistics could not stop the  pound’s decline.
The  pair later recovered and  rallied to  its daily highs in  the  mid-London session, before falling heading into the  American session. The  release of  the  upbeat US consumer price index report for August by  the  Bureau of  Labor Statistics saw the  pair head lower.
The  currency pair’s future performance is likely to  be affected by  geopolitical events over the  upcoming weekend.
The GBP/USD currency pair was trading at 1.2818 as at 12:55 GMT, having recovered from a low of 1.2763. The GBP/JPY currency pair was trading at 136.08, having risen from a low of 135.58.
If you have any questions, comments, or opinions regarding the Great Britain Pound, feel free to post them using the commentary form below.