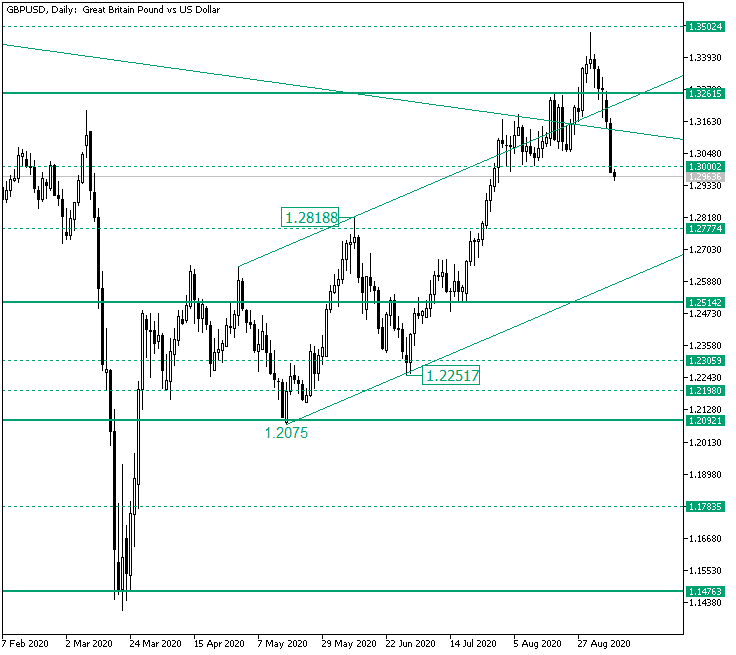 The Great Britain pound versus the US dollar currency pair sharply depreciated. Are the bears strong enough to continue?

Long-term perspective
After printing the 1.2075 low and validating the firm 1.2092 support, the price began an ascending movement. The movement topped at 1.2818 before retracing to the 1.2251 low, from where another appreciation commenced.
This laid the foundation for an ascending trend, one which has defined an impulsive swing so strong that it extended a hair away from 1.3502.
But from 1.3502, the price ebbed and washed away the accomplishment of conquering a triple resistance area — the major 1.3261 level, the descending trendline, and the upper line of the ascending channel.
Now, as the price got under the intermediary level of 1.3000, it is just a matter of time until the bears resume their movements.
So, one scenario is the one in which the price oscillates under 1.3000. After a short-term consolidation phase, one that can take the shape of a pennant or flag, the fall could continue, 1.2777 being a possible support area.
Another scenario, still bearish, highlights the possibility of a rise from 1.3000 that would later be contained by the descending trendline (or by 1.3261). After one of these lines is validated as resistance, the second strong fall may come, targeting the double support etched by 1.2777 and the lower line of the ascending channel.
Only if the bulls conquer 1.3261, then the profile would turn back to a bullish one, with 1.3502 as a target.

Short-term perspective
The appreciation that started from the 1.3053 low extended until the 1.3482 high. From there, a very determined decline began, piercing important support levels and — as of writing — halting just below 1.2983.
If 1.2983 remains a resistance, then 1.2876 may be the next target. On the flip side, a validation of 1.2983 as support could set 1.3157 as a target, but in the light of those discussed for the long-term, this could very well be a short-lived event.