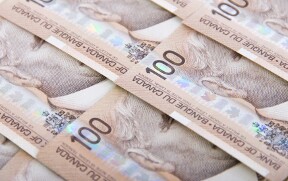 The Canadian dollar is slumping to its lowest level in two weeks against the US dollar on Tuesday. The loonie is plummeting primarily on crude oil crashing as much as 9%, joining the broader market selloff. It is going to be relatively quiet on the data front this week, which means the loonie will find direction on energy prices and the central bankâs midweek policy meeting.

October West Texas Intermediate (WTI) crude oil futures cratered $3.37, or 8.47%, to $36.42 per barrel at 15:43 GMT on Tuesday on the New York Mercantile Exchange. November natural gas futures have also plunged $0.113, or 4.37%, to $2.475 per million British thermal units (btu). Crude prices have been hammered so far this month, falling more than 15% in one week.
Since Canada maintains a current account deficit and oil and gas are its main exports, the loonie is sensitive to the change in prices, as well as the international flow of capital and trade. Plus, when there are significant fluctuations in energy commodity prices â high or low â the national economy is affected.
This week, August housing starts and second-quarter capacity utilization data will be released.
On Wednesday, the Bank of Canada (BoC) will hold its September policy meeting. It is widely expected that the central bank will leave its benchmark interest rate at 0.5%, and analysts think the BoC will follow the path of the Federal Reserve by leaving inflation higher for longer, which would keep rates at historic lows for long. Governor Tiff Macklem recently signaled that the BoC would not pull the trigger on a rate hike until 2023.
The bond market was red across the board. The benchmark 10-year bond tumbled 4.4 basis points to 0.553%, the 20-year bond slipped 3.6 basis points to 0.831%, and the three-year bond dropped 2.6 basis points to 0.263%
The USD/CAD currency pair rose 0.78% to 1.3200, from an opening of 1.3099, at 15:55 GMT on Tuesday. The EUR/CAD 0.5% to 1.5550, from an opening of 1.5475.
If you have any questions, comments, or opinions regarding the Canadian Dollar, feel free to post them using the commentary form below.