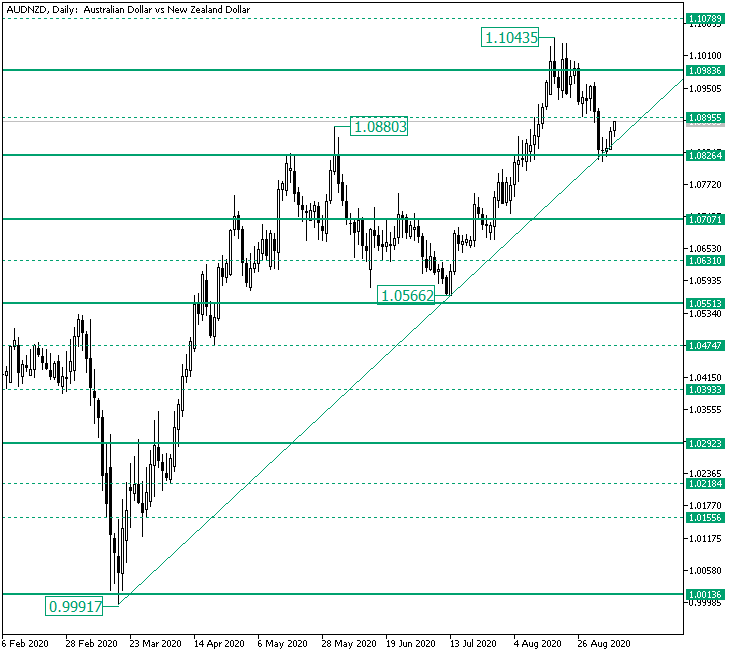 Bulls Determined to Conquer 1.0983 on AUDNZD

The Australian versus the New Zealand dollar currency pair seems not to be willing to give in to any bearish request. But will the bulls succeed in their endeavor?

Long-term perspective
From the 0.9991 low, which validated the 1.0013 support level, the price extended until the 1.0880 high. This appreciation handed over the baton to a corrective phase that stretched between the 1.0880 high and the 1.0566 low.
As the 1.0566 low confirmed yet another firm supportive area, the bulls had a new chance to drive the prices higher, which they did, etching the high of 1.1043.
However, since the 1.1043 high is above yet another significant level, the 1.0983 resistance, respectively, the bears took their chance to draw a correction, one that — as of writing — develops from the 1.1043 high to the double support defined by the ascending trendline and the 1.0825 level.
Taking into consideration that the trend is ascending and that a double support area just might have been validated, the first scenario, a bullish one, explores the possibility of the new rally to reach the 1.0983 level and conquer it. But for this to happen, the 1.0895 intermediary level has to be confirmed as support.
On the flip side, if 1.0895 acts as resistance, then it may turn the price around, sending it under 1.0826. Thus, for the bearish scenario, if 1.0826 is validated as resistance, then 1.0707 is the next bearish stop.

Short-term perspective
The rally that started from the 1.0717 low extended until the 1.1043 high. However, since 1.1030 is a substantial resistance area, the bears were able to take control and cause a depreciation that reached the 1.0820 support level.
If 1.0866 gets confirmed as support, then the bulls can reach the 1.0921 intermediary level. If they do that, then they have an open path until the 1.1030 level.
However, if the price slips under 1.0820, then the bears could send it to the 1.0741 intermediary support.