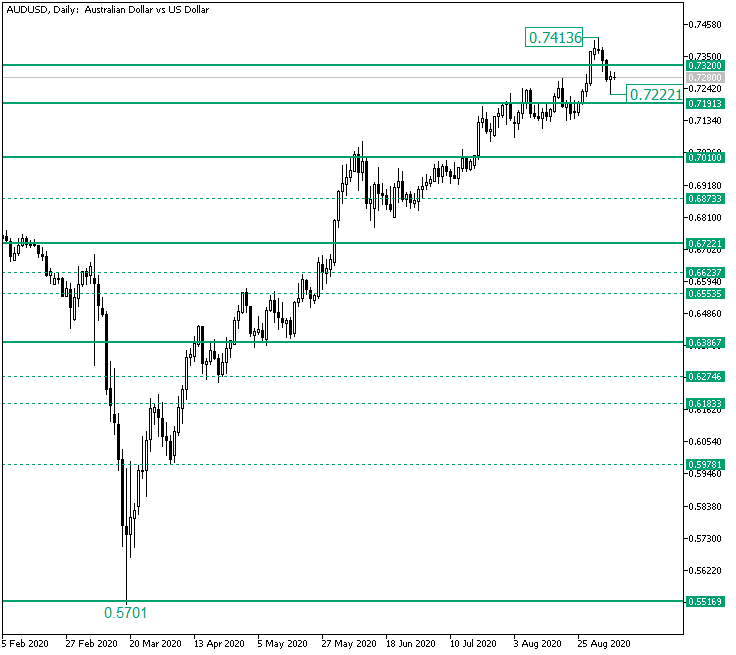 The Australian versus the US dollar currency pair slipped under the major 0.7320 level. Are the bears coming back?

Long-term perspective
The appreciation that started from the 0.5701 low extended until the 0.7413 high. Reaching the high also meant piercing the firm 0.7230 level. So, as the bulls inscribed the price above the level, the expectations were for the level to be validated as support.
However, the price slipped sharply under 0.7230, printing the low of 0.7222. Now, from the bullish perspective, the fact that the price noted a higher low is to their advantage. As the trend is ascending, the bulls have yet another point to their advantage.
Nevertheless, the bears have a solid argument: the false piercing of the 0.7320 level.
So, the first scenario is the one in which the bulls manage to bring the price back above 0.7320. If this happens, they can extend the movement to the 0.7400 psychological level — not highlighted on the chart.
Still, the second scenario, one that favors the bulls as well, postulates for 0.7191 to hols as support. If it unfolds, the price would have to decide what to do at 0.7320, as passing it may continue the ascending movement, while confirming it as resistance could result in a trend change.
The last scenario, a bearish one, is the one in which 0.7191 gives way, exposing 0.7010, which plays the role of the first bearish target.

Short-term perspective
From the 0.7135 low, the price accelerated towards the 0.7413 high. Nonetheless, once there, a strong fall commenced, one that washed away most of the gains.
The drop found support — at least for the time being — at the firm 0.7238 level. But even after a relatively strong retracement, the 0.7294 intermediary level was not able to sustain the bullish endeavor.
So, if the bulls give one more try and succeed in conquering 0.7294, they could challenge the 0.7413 high. The same is valid in the case in which 0.7238 is confirmed as support. But if the latter is pierced and turned to resistance, then 0.7170 is the next bearish objective.