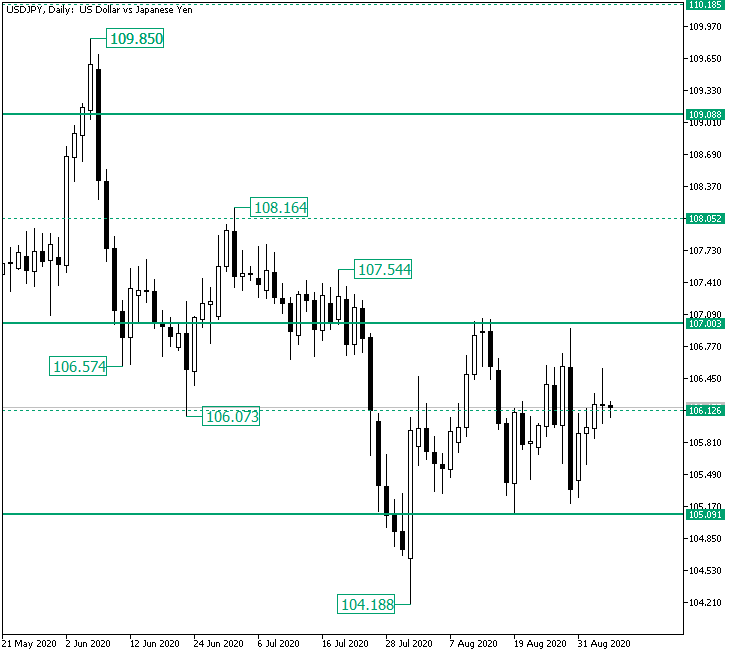 The US dollar versus the Japanese yen currency pair seems to be confined between 107.00 and 105.09. Who will make the next movement?

Long-term perspective
The false break of the major 109.00 resistance level, which peaked at 109.85, extended to as low as 104.18, from where it retraced above the firm 105.09 support level, thus marking yet another false breakout.
Initially, the intermediary level of 106.12 seemed to have limited the bullish attempt and render the 106.07 low as resistance, but the bulls managed to pierce it, sending the price back to the 107.00 psychological level.
Nevertheless, from there, the price rotated and went for 105.09. Upon reaching the area, it validated it as support, thus rendering the latest developments as a flat limited by 107.00 as resistance and 105.09 as support.
Of course, considering that the overall unfolding from the 109.85 high is a downward movement, the first scenario to be considered is the continuation of the depreciation. A fist step along this path would be represented by the validation of 106.12 as resistance. If this happens, 105.09 would be the first objective. Besides that, 105.09 could also be under a lot of bearish pressure, which, if it leads to the piercing of the level, may send the price to the 104.18 low.
Another short setup could be from 107.00, but this would only prolong the range. Of course, reaching 107.00 implies that 106.12 served as support, continuing the current swing that started on August 31. Noteworthy is such progress may expose 107.00, which, if it cedes, leads the way to 108.05.

Short-term perspective
From the 104.18 low, the price rallied to 107.05, a high which is part of the false piercing of the 106.77 intermediary level. After the fall that validated the double support etched by the ascending trendline and the 105.27 intermediary level, the bulls attempted to pierce 106.77, yet again.
However, their efforts were countered by the bears, who sent the price under the ascending trendline. But the bulls would not give up that easy, as soon after they stopped the price at 105.27 and pushed it until the 106.55 high. By doing so, the bulls placed the price above a possible support area, defined by the same ascending trendline and, this time, by the firm 108.02 level.
Thus, the possible double support area may aid the bulls in their efforts to craft a new high. If this happens, 106.77 is the first target, but also a candidate for becoming a support level.
On the flip side, if the aforementioned double support fails, then the fall would extend until 105.27, but it may also reach 104.44.