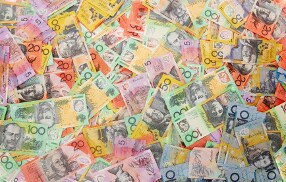 The Australian dollar was weak today, falling against almost all other most-traded currencies. Some market analysts blamed the decline on the disappointing trade data released in Australia during the trading session, while others thought that it might be just a corrective sell-off after the incredibly good performance last month.
The Australian Bureau of Statistics reported that the trade balance surplus shrank to A$4.61 billion in July from A$8.15 billion in June, seasonally adjusted. Experts had predicted a bit smaller decline to A$5.00 billion.
In other news, the Australian Industry Group/Housing Industry Association Australian Performance of Construction Index dropped from 42.7 in July to 37.9 in August. Falling while already below the neutral 50.0 level the indicator showed that the sector was contracting with increasing pace. The report commented on the result:

After a pause in July, the pace of decline in business conditions worsened again across all construction sectors, as COVID-19 activity restrictions stepped up in Victoria and state borders were closed again elsewhere.

As for data in China, Australia’s biggest trading partner, the Caixin China Services Purchasing Managers’ Index slipped a little from 54.1 in July to 54.0 in August, matching expectations. The index remained firmly above the 50.0 level of no change, meaning that China’s services sector continued to expand at a healthy pace. The report noted that the growth was driven by domestic demand, while the situation overseas remains precarious:

The return to more normal market conditions, greater client numbers and the resumption of projects led to a further increase in new orders during August. Although solid, the latest upturn marked the softest increase for four months, with the rate of growth slipping below the long-run series average. Higher sales were largely driven by firmer domestic demand, according to underlying data, as new export work fell for the second month in a row.