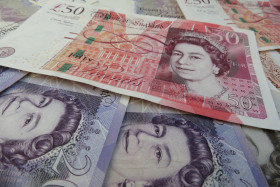 Sterling Pound Falls Against the Dollar on Dovish BoE Speeches

The  Sterling pound today fell against the  US dollar following dovish speeches from Bank of  England policymakers regarding the  British economy and  monetary policy. The  GBP/USD currency pair kept falling despite the  release of  weak US jobs data as  markets interpreted the  BoE’s willingness to  take extra easing measures negatively.
The  GBP/USD currency pair today fell from an  opening high of  1.3401 during the  Australian market before falling to  a  low of  1.3283 in  the  American session but was off these lows at  the  time of  writing.
The  currency pair’s initial decline was fueled by  investor sentiment, and  the  release of  upbeat UK Nationwide housing prices index report for  August could not stop the  pair’s fall. British housing prices rose 2% in  August, beating analysts estimates of  a  0.5% expansion. The cable headed lower after the  BoE Deputy Governor Dave Ramsden said that they could ramp up Qe if any market dysfunctions occurred requiring such actions. BoE Governor Andrew Bailey added that the  bank should have a  robust framework to  help it go big and  go fast if needed.
However, Gertjan Vlieghe was more hawkish as  he talked about unwinding the  bank’s balance sheet without affecting the  economy. The  pair kept falling despite the  US ADP employment change report coming in  at  428,000 jobs versus the  expected 950,000 jobs. The  upbeat US factory orders for  July also drove the  pair lower.
The  currency pair’s future performance is likely to  be affected by  tomorrow’s UK and  US PMI reports.
The  GBP/USD currency pair was trading at  1.3334 as  at  19:23 GMT, having fallen from a  high of  1.3401. The  GBP/JPY currency pair was trading at  141.68, having risen from a  low of  141.01.
If you have any questions, comments, or opinions regarding the Great Britain Pound, feel free to post them using the commentary form below.