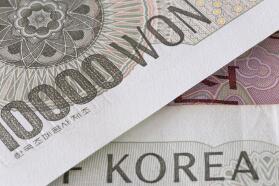 The South Korean won is mixed in the middle of the trading week as inflation and manufacturing data drive one of the worst-performing Asian currencies this year. Although the won has recovered against the greenback since June, the currency has come under a lot of pressure based on the recession and a coronavirus resurgence. Could the won retest 1,200 by the yearâs end?

According to Statistics Korea, the consumer price index (CPI) rose 0.6% in August, up from the 0% reading in July. The market had anticipated a jump of 0.2%. The increase in inflation, which climbed at an annualized rate of 0.7% last month, was due primarily to the 15.8% spike in food prices.
In August, the IHS Markit manufacturing purchasing managersâ index (PMI) advanced to 48.5, up from 46.9 in July â anything below 50 indicates a contraction. This is the eighth consecutive month of the manufacturing PMI slumping as output, new orders, selling charges, and employment eased. But business confidence turned positive for the first time since February, mainly on optimism surrounding foreign demand.
On the trade front, imports fell 16.3% year over year last month, while exports dropped 9.9% at an annualized pace. The trade surplus was relatively unchanged at $4.12 billion.
Earlier this week, industrial production came in at a worse-than-expected 1.6%, while manufacturing output plunged 2.4% YoY. Construction output also slipped 0.6%. Retail sales plummeted 6% in July, lowering the annualized increase to just 0.5%.
South Korea has witnessed a resurgence in coronavirus cases over the last month that has been linked to demonstrations and church services. Since the beginning of August, the government has reported triple-digit infections every day, leading to speculation among investors that it could force the government to implement another lockdown or elevate social-distancing rules. The Ministry of Health has rejected these reports, but the broader financial market has witnessed renewed volatility that has prompted the government to extend a short-selling ban for another six months.
The USD/KRW currency pair rose 0.14% to 1,187.27, from an opening of 1,185.59, at 13:29 GMT on Wednesday. The EUR/KRW dropped 0.5%, from an opening of 1,412.20.
If you have any questions, comments, or opinions regarding the South Korean Won, feel free to post them using the commentary form below.