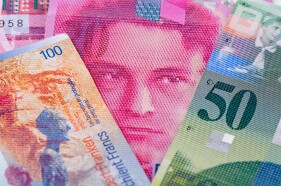 USD/CHF Rises As SNB, Others Wind Down Dollar Liquidity Operations

The Swiss franc is rising to finish the trading week as the Swiss National Bank (SNB) announced that central banks are scaling back their US dollar liquidity operations. As foreign demand diminishes, central banks agreed that currency swap agreements were no longer necessary. Does this bode well for the greenback, or does it signal a decline ahead for the buck?

According to the SNB and other major central banks, the Federal Reserve is poised to reduce the number of seven-day swap operations with its counterparts from three per week to one tender a week. The policy adjustment is set to go into effect on September 1.
Switzerlandâs central bank said in a statement:

In view of continuing improvements in U.S. dollar funding conditions and the low demand at recent 7-day maturity U.S. dollar liquidity-providing operations, the Bank of England, the Bank of Japan, the European Central Bank and the Swiss National Bank, in consultation with the Federal Reserve, have jointly decided to further reduce the frequency of their 7-day operations from three times per week to once per week.

Reportedly, however, the US central bank would maintain its schedule for 84-day tenders with the European Central Bank (ECB), the Bank of England (BoE), the Bank of Japan (BoJ), and the SNB at one per week.
At the height of the market meltdown, the Fed initiated dollar liquidity operations for the first time since the 2008–2009 financial crisis. There was such incredible foreign demand for the greenback that it sent pumped up the currency’s foreign exchange rate. Since then, with financial markets calmer and an ample supply of dollars, central banks are confident that they can meet a sudden influx of demand.
On the data front, industrial production declined at an annualized rate of 8.6% in the second quarter, down from the 0.6% jump in the previous quarter. The coronavirus public health crisis affected output for all sectors, including manufacturing (-8.9%), mining (-6.4%), and electricity supply (-5.9%). This was the first quarterly contraction since 2016.
Next week, jobs, economic sentiment, and gross domestic product (GDP) data will be released.
The USD/CHF currency pair rose 0.48% to 0.9122, from an opening of 0.9076, at 18:59 GMT on Friday. The EUR/CHF fell 0.11% to 1.0755, from an opening of 1.0766.
If you have any questions, comments, or opinions regarding the US Dollar, feel free to post them using the commentary form below.