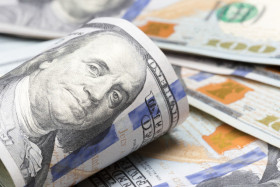 The US dollar is recording modest gains on Thursday after the number of Americans filing for first-time unemployment benefits moved back above the one million mark. The greenback is looking to advance for two consecutive sessions as the safe-haven currency has cratered 7% since May. Where is the buck headed, and are jobless claims on an upward trend?

According to the Department of Labor, initial jobless claims came in at 1.106 million in the week ending August 15. The market had forecast another week of below million, with a reading of 925,000.
Continuing jobless claims topped 14.844 million, while the four-week average, which eliminates the week-to-week volatility, was short of 1.176 million.
Last week, the number of Americans filing for first-time unemployment benefits clocked in at 971,000. Continuing jobless claims hit 15.480 million, and the four-week average hit 1,255 million.
In other data, the Federal Reserve Bank of Philadelphia‘s manufacturing index fell to 17.2 in August, down from 24.1 in July. The median estimate was 21.
On Friday, the manufacturing, composite, and services purchasing manager index (PMI) numbers will be released. Existing home sales for July will also be published.
The US dollar strengthened on Wednesday after the Federal Reserve released minutes from last monthâs Federal Open Market Committee (FOMC) meeting. The central bank warned that the coronavirus pandemic would “weigh heavilyâ on the US economy, labor market, and inflation. Policymakers agreed that the current suite of tools â low interest rates, unlimited asset-buying, and overnight and term repo operations â should remain in effect until they are âconfident that the  economy had weathered recent events and  was on  track to  achieve the  Committeeâs maximum employment and  price stability goals.â
US financial markets were red across the board in pre-market trading as the jobless claims figure came in worse than expected. The leading stock indexes also traded in the red before the opening bell on coronavirus concerns, US-china tensions, and uncertainty in the broader global economy.
The US Dollar Index, which gauges the greenback against a basket of currencies, edged up after the weekly labor numbers. The index, which has slumped 0.4% this week, picked up 0.07% to 92.95, from an opening of 92.96.
Treasury yields tumbled on the economic data as the benchmark 10-year bond declined 0.035 basis points to 0.64%. The two-year bill dipped 0.006 basis point to 0.135%, while the 30-year Treasury dropped 0.045 basis points to 1.37%.
The USD/CAD currency pair slid 0.1% to 1.3206, from an opening of 1.3218, at 12:44 GMT on Thursday. The EUR/USD rose 0.11% to 1.1853, from an opening of 1.1841.
If you have any questions, comments, or opinions regarding the US Dollar, feel free to post them using the commentary form below.