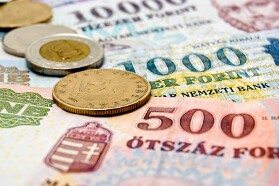 The Hungarian forint is looking to rebound against a plethora of currencies on Tuesday after the Central European country recorded disappointing economic data that showed how hard it was hit by the coronavirus pandemic. The drop in economic activity has forced foreign exchange traders to reevaluate their positions in the forint as analysts anticipate further contraction.

According to the Hungarian Central Statistical Office, the gross domestic product (GDP) contracted 14.5% in the second quarter, down from the 0.4% slide in the first quarter. Year-on-year, the GDP shrank 13.6% in the April-to-June period, coming in worse than the market forecast of -10.5%. Overall, it was the sharpest decline on record as most sectors plunged amid the COVID-19 public health crisis.
The Q2 drop was worse than in Poland and Slovakia. Before the coronavirus pandemic, the Hungarian economy expanded at a healthy 4% to 5% quarterly clip.
Construction output cratered 15.7% in June, up slightly from the 18.5% slump in May. The inflation rate advanced 1.1% last month, lifting the consumer price index (CPI) to a 3.8% annualized increase. The core inflation rate, which strips the volatile food and energy, advanced 4.5%.
At the end of the month, unemployment and gross wage data will be released.
Next week, the National Bank of Hungary will hold its August policy meeting where it is expected to keep interest rates unchanged at 0.6%. The central bank has cut rates twice this year, from 0.9% in May to 0.6% in July.
Officials might base their decision on the virus outbreak as the country was hit hard â at home and abroad. Despite flattening the curve by the end of May, Budapest is beginning to see a timid uptick in cases. So far, Hungary has had nearly 5,000 cases, with a death toll of a little more than 600.
The authorities might also need to take into account the rising national debt. The government had undertaken aggressive public spending during the global financial crisis, resulting in an increase in the state debt ratio to 71.9%. This, as well as the falling GDP, has triggered FX traders to reconsider their positions in the forint and other CEE currencies.
The USD/HUF tumbled 0.6% to 292.27, from an opening of 294.01, at 19:21 GMT on Tuesday. The EUR/HUF slipped 0.09% to 348.86, from an opening of 349.14.
If you have any questions, comments, or opinions regarding the Hungarian Forint, feel free to post them using the commentary form below.