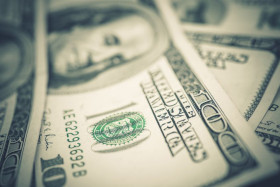 The US dollar is trading mixed against multiple G10 currencies on Tuesday as the Federal Reserve begins its historic corporate bond-buying initiative. Investors were also concentrating on core consumer prices sliding and economies reopening across the country.

On Tuesday, the US central bank will start purchasing corporate bond exchange-traded funds (ETFs) as part of its new $2.3 trillion Main Street Lending Facility. The New York Fed Bank confirmed in a statement on Monday evening that the ETF acquisitions will be primarily exposed to investment-grade corporate bonds, but it did note that a portion will be allocated to high-yield junk bonds. The Eccles Building will buy debt issued by companies directly.
BlackRock will be the body in charge of the operation, with the central bank overseeing the program.
Its sister initiative, the Primary Market Corporate Credit Facility of buying actual bonds and syndicated loans, is scheduled to start soon.
The corporate debt market has exploded this year. As of April, issuance has topped $834 billion, up 69% from the same time a year ago. On Monday, nearly $26 billion hit the market. The Fedâs intervention hit the pause button on the chaos in corporate bond trading and allowed companies to issue more debt. A lot of businesses have issued extraordinary levels of debt, including Boeing, Netflix, and Starbucks.
On the data front, investors have been combing through inflation numbers. The April inflation rate contracted 0.8%, the steepest decline in 12 years due to a 21% plunge in gasoline prices. The core consumer rate, which eliminates food and energy, slipped 0.4% last month.
In contrast, food prices soared at their highest levels since February 1974, according to the Bureau of Economic Analysis (BEA). The cost for meats, poultry, fish, and eggs climbed 4.3%; fruits and vegetables jumped 1.5%, and bakery and cereal products increased by 2.9%.
Rent and household furnishing indexes also surged in April.
Meanwhile, the National Federation of Independent Business (NFIB) found that its Small Business Optimism Index fell 5.5 points to 90.9 last month. This is the lowest level since March 2013. Sales expectations for the next six months also plummeted 30 points to -42. However, they believe business conditions will improve over the next six months.
The US Dollar Index, which measures the greenback against a basket of currencies, plunged 0.5% to 99.73, from an opening of 100.23.
The USD/CAD currency pair dipped 0.07% to 1.4000, from an opening of 1.4007, at 15:09 GMT on Tuesday. The EUR/USD advanced 0.57% to 1.0871, from an opening of 1.0807.
If you have any questions, comments, or opinions regarding the US Dollar, feel free to post them using the commentary form below.