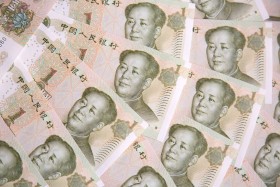 The Chinese yuan is weakening against its major currency competitors midweek on reports that the US administration is considering canceling all or part of the roughly $1.1 trillion debt owed to China. According to local reports, Beijing is now mulling over a plan that would reduce its holdings of Treasurys as part of overall efforts to diversify the nationâs foreign exchange reserves.

The White House has blamed China for its mishandling of the coronavirus pandemic that has shut down the global economy. Policymakers are weighing retaliatory measures that could punish Beijing, including new tariffs and potentially not paying China what is owed to them.
Although analysts are doubtful that Washington could pull the trigger on a nuclear option, the Chinese government is ostensibly preparing for it. The countryâs response could be to unload large portions of its US debt holdings, which it has been unwinding for the last eight years. Should Beijing participate in this scheme, it would seriously harm the US government bond market, which would come as the Treasury Department attempts to borrow $3 trillion to fund its coronavirus stimulus spending.
Ultimately, defaulting on the debt would destroy the marketâs faith in the legitimacy of the federal government covering its obligations. This would send domestic interest rates soaring, which would make borrowing cost more for the government, the private sector, and consumers.
Cliff Tan, East Asian head of global markets research at MUFG Bank, told the South China Morning Post is skeptical President Donald Trump is even thinking about this retribution since it would hurt the US.

It’s such a crazy idea that anyone who has made it should really have their fitness for office reconsidered, view this as largely a political ploy for his re-election and a cynical one because it would destroy the financing of the US federal budget deficit.