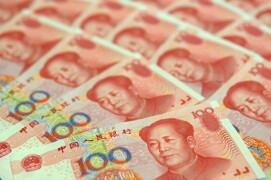 The Chinese yuan is rallying against many currency competitors on Tuesday as the worldâs second-largest economy surprised global financial markets by reporting manufacturing growth in March. The yuan is also benefiting from additional easing efforts by the Peopleâs Bank of China (PBoC).

According to the National Bureau of Statistics (NBS), the manufacturing purchasing managersâ index (PMI) surged from 35.7 in February to 52 in March. This beat market expectations of a 45 reading and is the strongest pace of expansion since September 2017. Here are the specific data points: output came in at 54.7, new orders soared to 52.0, and employment increased to 50.9. Raw materials inventories and supplier delivery time continued to contract.
The non-manufacturing PMI also climbed from an all-time low of 29.6 in February to 52.9 in March. New orders rose to 49.2, employment advanced to 47.7, and input costs edged up to 49.4. The best measurement may have been business confidence, which strengthened from 40.0 to 57.3.
Officials say, however, that the strong readings may not signal stabilization in economic activity.
Asian markets were mixed on Tuesday as the Nikkei fell 0.88%, the Shanghai Composite Index was flat, and the Hang Seng rallied 1.85%. The US markets were also in the red to end the worst quarter ever.
Meanwhile, the central bank is joining its peers as the PBoC announced additional monetary easing measures. The PBoC lowered the interest rate on its seven-day reverse repurchasing agreement by 20 basis points from 2.40% to 2.20%, injecting $7.1 billion into the banking system. This is the third rate cut to the reverse repo agreement since November.
Analysts believe that the PBoC will introduce more easing tactics to expand bank lending and pump more liquidity into the financial system. While the first-quarter gross domestic product (GDP) is anticipated to be a blood bath, the second-quarter GDP reading will be crucial in showing if Beijingâs maneuvers are paying off.
The USD/CNY currency pair tumbled 0.19% to 7.0869, from an opening of 7.1003, at 14:07 GMT on Tuesday. The EUR/CNY fell 1.06% to 7.7584, from an opening of 7.8391.