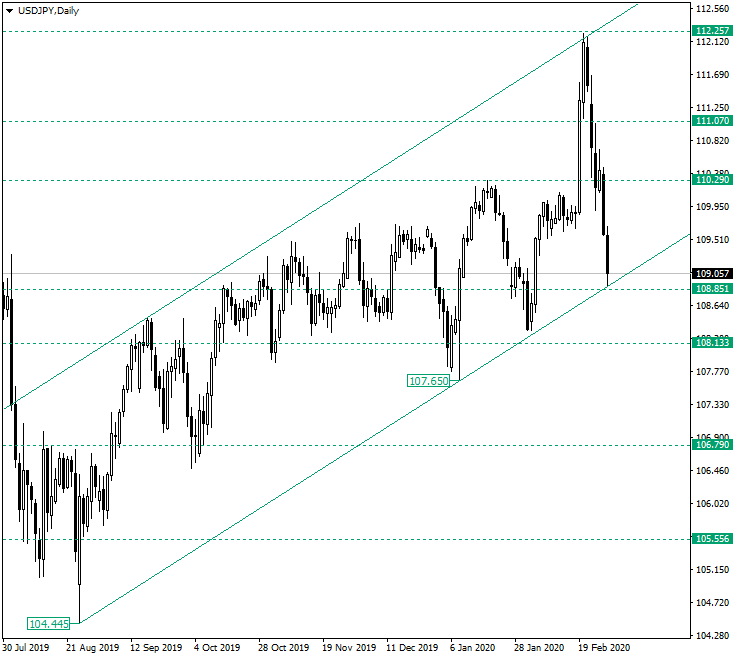 Strong Correction on USD/JPY from 112.25

The US dollar versus the Japanese yen currency pair retraced drastically. Are the bulls in danger in the long term?

Long-term perspective
After printing the low of 104.44, the price went above the 105.55 support level and from there all the way to the 110.29 resistance.
But before reaching 110.29, the bulls were challenged, as the bears tried to establish the price under the 108.13 level. Their victory is marked by the low of 107.65.
Joining the two aforementioned lows — 104.45 and 107.65, respectively — brings to light a support trendline that, if joined by a parallel line starting from the high of September 18, 2019, crafts an ascending channel.
The resistance line of the ascending channel, alongside with the resistance level of 112.25, contained the advancement that started on February 19, spelling the strong drop.
Since the depreciation sent the price under the 110.29 level, the bears may be entitled to believe that they are dominant.
In this context, reaching the lower line of the ascending channel was only a matter of time. It is also possible for the line to be pierced, thus facilitating contact with 108.85.
The event in which the price bounces back from the double support — made possible by the lower line of the ascending channel and the 108.85 level — and manages to establish above 110.29, triggers the possibility of an appreciation, as the buyers would be tempted to see the prices at 111.07.

Short-term perspective
The price printed the low of 108.31 and then started an appreciation that paused above the 109.75 level.
The resumption drove the price at 111.22. To put it another way, the price skyrocket at 111.22, piercing important levels short term like they weren’t even there: 110.22, 110.63, and 111.01.
Very interesting to see that, on its way down from the peak of 112.22, the price confirmed each and every pierced level as resistance, before further declining, forming a string of lower highs in the process: 111.04, 110.70, and 110.35.
As the former support area of 109.75 was pierced, the bears sent the price to the next support level, 109.19, and also attempted to break it.
If the breach of 109.19 is not rendered as a false one, by a retracement above the level followed by a confirmation of it as support, then the strong decline could continue, targeting the next support level, 108.43 respectively.
But even if 109.19 end up as being confirmed as support, any appreciation may be limited by 109.75, as the bears seek further reasons to sustain their downward momentum.