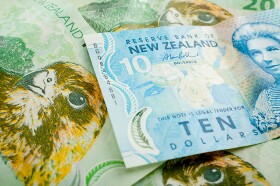 The New Zealand dollar was mixed today, managing to gain on some major currencies, even as the market sentiment remained unfavorable to riskier currencies linked to commodities. Domestic macroeconomic data was not helpful, failing to provide a clear picture of New Zealand’s economy. One of the reports released over Thursday’s session beat expectations while the other one was not good.
Statistics New Zealand reported that the trade balance turned to a deficit of NZ$340 million in January from a surplus of NZ$384 million in the previous month. While not a particularly good reading by itself, it was at least better than the market consensus of a NZ$545 million deficit. Exports climbed by 8.8% from a year ago while imports fell by 4.0%. The biggest contributor to New Zealand’s export revenue remained China as exports to the Asian country jumped by 31%. But that also means that the negative impact of the coronavirus outbreak in China can potentially hurt the New Zealand economy even more.
Talking about the negative impact of the coronavirus disease known as COVID-19, the ANZ business confidence dropped to -19.4 in February from -13.2 in the preceding month. The report blamed the COVID-19 outbreak for worsening confidence:

It is clear that the human and economic damage being wrought by the devastating COVID-19 outbreak in China, and now in other countries, is taking a heavy toll on sentiment and confidence in the primary sector and manufacturers already (with dry conditions also weighing). And not just sentiment, but incomes, turnover and profits.