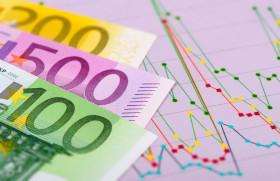 The euro today traded haphazardly against the US dollar oscillating between gains and losses as investors reacted to conflicting news reports about Germany’s fiscal policies. The EUR/USD currency pair rallied briefly then fell and later inched higher as the single currency failed to post sustained gains against the weak greenback.
The EUR/USD currency pair today spiked to a high of 1.0908 in the mid-European session before dropping to a low of 1.0855 and had recovered most of its losses at the time of writing.
The currency pair traded lower at the start of today’s session as Europe grapples with rising coronavirus infections in countries such as Austria, Switzerland, Greece, Croatia and Italy where there’s an outbreak. The pair spiked higher at the start of the European session before falling soon afterwards. Another spike to the pair’s daily highs was attributed to news that Germany was finally ready to allow local governments to borrow suspending a constitutional debt brake. The single currency had a muted reaction to Christine Lagarde‘s speech in the early American session as the European Central Bank President did not reveal any new policy moves.
The pair rallied higher in the early American session after Michel Barnier the top EU trade negotiators offered an olive branch to the UK in the upcoming Brexit talks. The pair ignored the upbeat US new home sales report for January released by the Census Bureau.
The currency pair’s future performance is likely to be affected by coronavirus headlines and tomorrow’s multiple US and European releases.
The EUR/USD currency pair was trading at 1.0885 as at 17:29 GMT having recovered from a low of 1.0855. The EUR/JPY currency pair was trading at 120.12 having dropped from a high of 120.58.