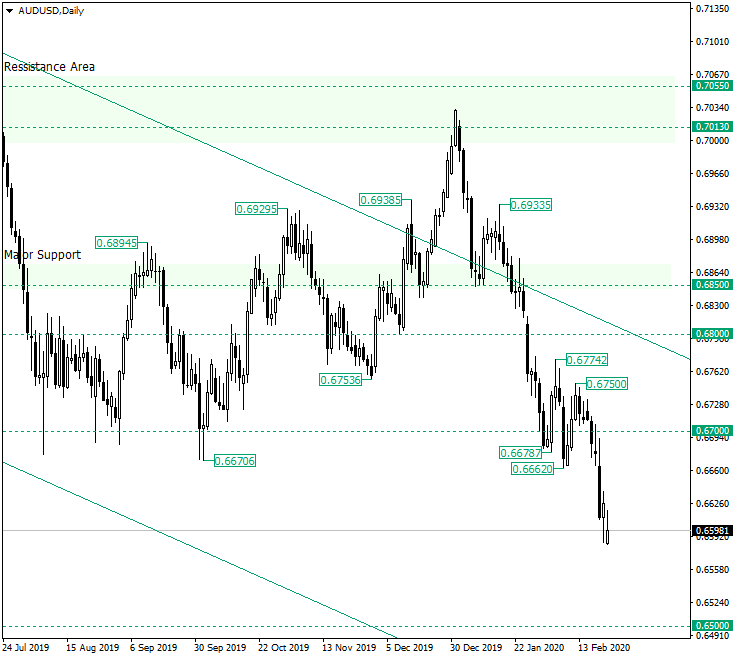 The Australian dollar versus the US dollar currency pair dropped from the 0.6700 multiannual level.

Long-term perspective
The head and shoulders pattern that confirmed the resistance area made possible by 0.7055 and 0.7013, respectively, and also caused the price to reenter the descending channel (and by doing so the price got beneath the major support of 0.6850), set in motion a strong fall, one that challenged the important 0.6700 psychological level.
After the attempts raised by the bulls to keep up with the bearish pressure, a battle that ended up by printing the lower highs of 0.6774 and 0.6750, and the lower lows of 0.6678 and 0.6662, respectively, the price made a sharp drop, reaching quotes just under the psychological level of 0.6600.
This context is favoring the bears, and will continue to do so as long as the bulls — for the time being — are under 0.6700.
The price could form a consolidative phase around the 0.6600 psychological level, and then continue towards the south.
During the consolidative period — or as a standalone movement — the price can make an extension towards 0.6700. Of course, the possible extension may only get near, being far from reaching or exceeding — the low of 0.6662. Once there, the bears would be joyful to short he market at even better prices.
All these possible scenarios target the 0.6500 psychological level. Only if the low of 0.6662 is revisited — and the price oscillates above it — the bears may be giving signs that they are running out of steam.

Short-term perspective
After the area of 0.6746 demonstrated its firm role as resistance, the price — under a lot of bearish optimism — pierced the support of 0.6705, confirmed it as resistance and dropped, reaching the next support level at 0.6600.
As long as 0.6600 holds, the bulls may try to drive the prices higher but, as discussed for the long-term perspective, this only translates into better prices for the sellers, as only conquering 0.6705 will cancel or delay any bearish scenarios for the upcoming period.
If 0.6600 gives way, the next target is represented by 0.6556, from where, in the light of the same long-term perspective, the depreciation could reach the 0.6500 level.