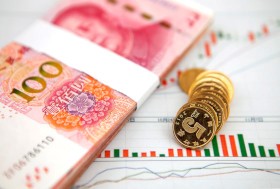 The Chinese yuan is strengthening against the major currency rivals to kick off the trading week, buoyed by investorsâ hopes that Beijing will launch additional fiscal and monetary stimulus to protect the economy from the Wuhan coronavirus fallout. Over the last two weeks, policymakers have unveiled economic measures to limit the damage from Covid-19, and financial markets have been ebullient over the announcements.

On Monday, the Peopleâs Bank of China (PBoC) lowered the medium-term lending rate by ten basis points to 3.15%, the lowest it has been since 2017. This injects approximately $29 billion of one-year medium-term loans into the market.
The central bankâs latest easing comes as the PBoC ordered lenders to âtolerateâ higher bad debt levels, particularly in areas that have been hit the hardest by the outbreak. It might be difficult for financial institutions to sustain these delinquencies, especially in the Hubei province since 160 local and foreign banks possess $600 billion in outstanding loans. Overall, Chinese financial institutions are sitting on about $250 billion in non-performing loans.
Bloomberg is reporting that many small businesses are bearing the brunt of the virus and if it persists, then many of these companies will close their doors and unable to repay their loans. A recent survey found that one-third of these companies anticipate a drop in revenue, and 85% revealed they are unable to maintain operations for more than three months under present conditions.
In another interesting development, the central bank mandated banks to disinfect deposits with ultraviolet light and then store the cash for at least a week before releasing the money back into the public. The PBoC confirmed that it will issue about 600 billion yuan in new bills and some of the current currency will be destroyed.
On the fiscal side, Finance Minister Liu Kun is planning targeted tax cuts, in addition to last weekâs announcement of across-the-board tax reductions. President Xi Jinping made a television appearance over the weekend and hinted at additional fiscal and monetary stimulus.
On the data front, the house price index rose 6.3% in January, down from the year-over-year 6.6% climb. Foreign direct investment into China advanced 4%, with most of the funds allocated to high-tech industries.
The USD/CNY currency pair tumbled 0.1% to 6.9803, from an opening of 6.9871, at 14:14 GMT on Monday. The EUR/CNY fell 0.11% to 7.5656, from an opening of 7.5737.