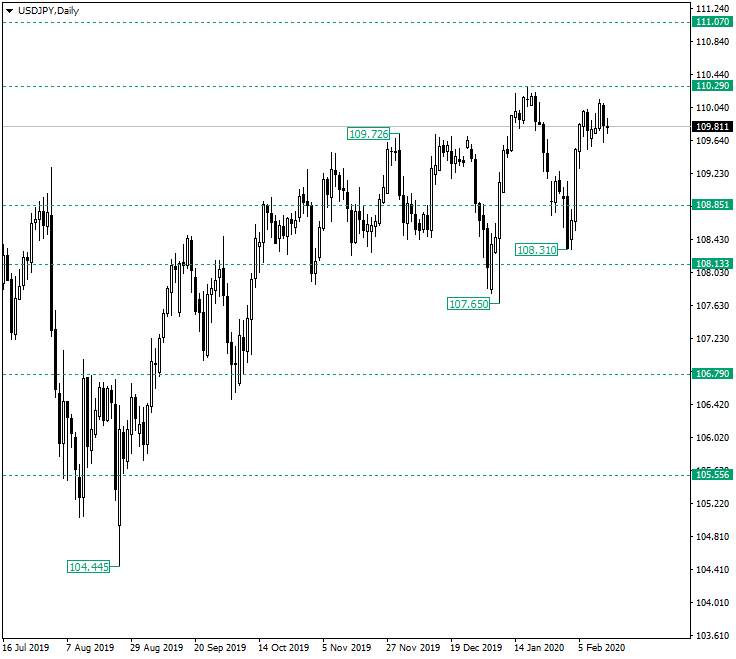 The US dollar versus the Japanese yen currency pair seems to have a hard time extending beyond the 110.00 psychological level. Is it that the price stalled or the bulls are catching their breath?

Long-term perspective
From the low of 104.44, the price commenced an ascending trend that, beginning with November 2019, showed signs of deceleration.
The area signed by the peak of 109.72 began to look like a possible strong resistance, and after the depreciation that printed the low of 107.65 took place, it could have been considered that the ascending trend ended.
But 107.65 unleashed a strong rally, one that passed beyond 109.72, touching 110.29. Yet, another downward leg formed and, after printing the low of 108.31, if mounted another appreciation.
All these swings, extending in such a manner, may point out to bullish exhaustion. The fact that the price stopped again after such a strong appreciation and at an important psychological level, 110.00 (not highlighted on the chart), respectively, just leads to the conclusion that the bulls are not putting enough pressure.
So, as long as 110.00 continues to be confirmed as resistance or as long as it is only falsely pierced, allowing only short-lived extensions until 110.29, another movement pointing towards the south may come into being, targeting 108.85 first and then 108.13.
Only if the bulls manage to drive the price above 110.29 and confirm it as support, then 111.07 may be in reach.