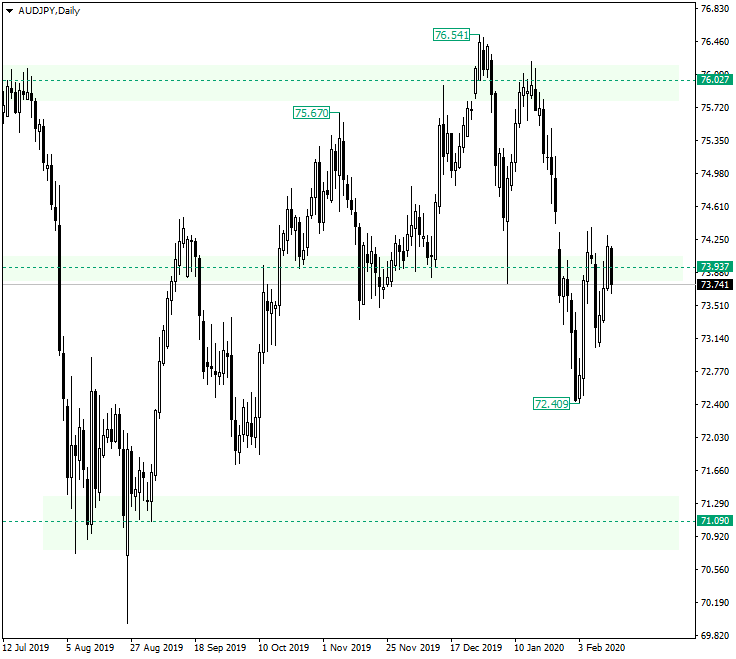 Bulls Failing to Conquer 73.93 on AUD/JPY

The Australian dollar versus the Japanese yen currency pair gives signs that the appreciation may be over. Is it so or the traders may be in for a surprise?

Long-term perspective
The ascending trend that started after the confirmation of the 71.09 level as support extended until the peak of 76.54 and ended after the confirmation as a resistance of the 76.02 level sent the price plumbing towards 73.93.
The strong fall from the resistance of 76.02 pierced the 73.93 support and extended until the low of 72.40.
From 72.40, the bulls tried to reconquer the level of 73.93 but to no avail.
Given the current unfolding, it is likely that, at a certain point, the bulls will try once more to take out 73.93. If this last attempt ends as a candle that confirms 73.93 as resistance or even extends beyond the highs of February 12 or February 6, respectively, just to come dropping under 73.93, then the bears may be entitled to believe that it’s their time.
If that is the case, then the main focus turns towards 71.09. Of course, on its way to this target, intermediary targets are also present and represented by the psychological levels of 73.00 and 72.00, respectively — not highlighted on the chart.
Only if the bulls manage to reconquer 73.93, then the path to 76.02 is open.

Short-term perspective
The strong depreciation found support at 72.47, but the lack of bullish power made finding a clear direction something problematic for the price.
In the current context, it is better to wait for a clear direction. This translates into waiting for a confirmation as resistance of 73.39 to see 72.47 being revisited or expecting the conquering of 74.56 for a clear path to 74.90, followed by 75.33.