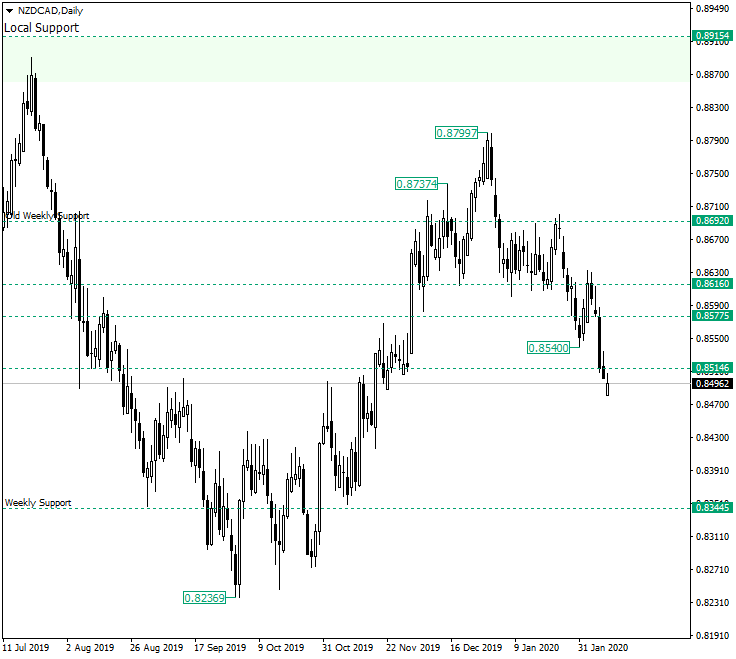 The New Zealand dollar versus the Canadian dollar currency pair reached the 0.8514 level. Is this only a met target or is the depreciation about to continue?

Long-term perspective
The depreciation that started from the peak of 0.8799, which is a part of the head and shoulders pattern with the left-side shoulder marked by 0.8737, extended to 0.8540, retraced, confirmed the level of 0.8616 — which is also the neck-line of the aforementioned chart pattern — as resistance, and continued towards the south, piercing the level of 0.8514 and extending under it for approximately 20 pips.
The context is now bearish because of two reasons. The first one is that whilst under the 0.8514 level, the price is in bearish territory.
The second one is that, in the market, the bearish echo originated by the head and shoulders pattern is still perceivable.
Given these variables, the next scenarios are plausible. The first one relies on the continuation of a consolidation just under 0.8514. It could take the shape of a bearish flag or pennant, or even of a sideways movement.
Another scenario is the one in which the bulls try to get the price back above the 0.8514 level, but the strong bearish pressure will bring it back beneath it.
Nevertheless, the continuation of the depreciation, followed by a throwback that will confirm the 0.8514 level as resistance, is also a possibility.
All the scenarios point to 0.8344 as the main target, with an intermediary stop at the psychological level of 0.8400 — not highlighted on the chart.

Short-term perspective
Just as in the case of the daily chart, the price finds itself just under a level, in this case 0.8516.
If the bulls manage to reconquer it, they may cause an appreciation that will last until 0.8600.
On the other hand, a failure of this attempt or the simple continuation of the consolidation under 0.8516, opens the path to 0.8417.