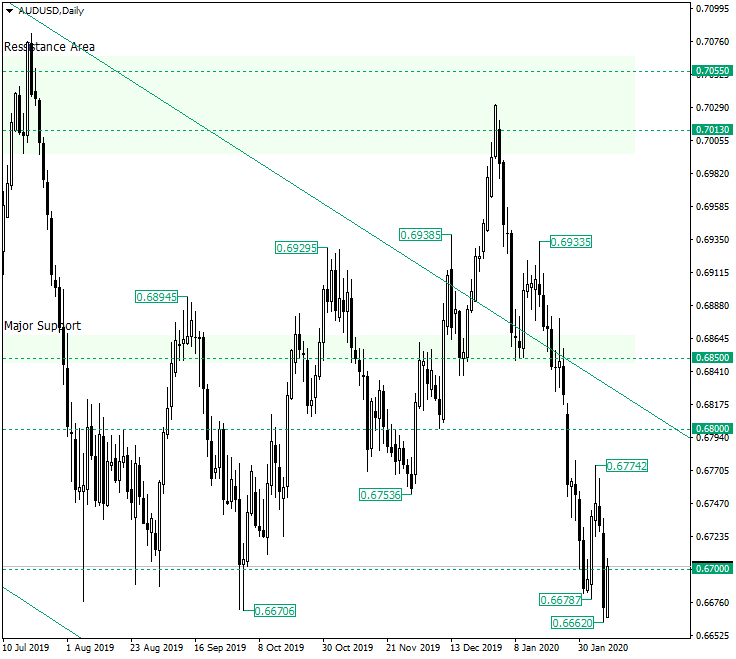 The Australian dollar versus the US dollar currency pair, although it may be still receiving some bullish support, seems to be in bearish hands.

Long-term perspective
The decline that followed the head and shoulders pattern — shoulders market by the peaks of 0.6938 and 0.6933, respectively — reached the area of the 0.6700 psychological level.
From there, after bottoming at 0.6678, the price climbed at 0.6774. Further appreciation was halted as the price confirmed the area corresponding to the low of 0.6753 as resistance and facilitated a new downwards movement.
This new depreciation exceeded the previously printed low, etching a new lower low at 0.6662.
Given the available context, respectively lower lows crafted under the important 0.6700 support, it can be said that the market profile is bearish.
As a consequence, as long as the price oscillates under the 0.6700 psychological level, further decline is to be expected. The main target for the bearish movement is represented by the 0.6500 level.
Only if the bulls manage to conquer the 0.6700 level, then the price might get the chance to challenge the 0.6800 level.

Short-term perspective
The confirmation of 0.6933 as resistance fueled a very convinced depreciation, one that reached the 0.6746 level.
The price tried to bottom at 0.6746, but to no avail, as the decline continued. This led to the price reaching the next level, 0.6705, respectively.
However, 0.6705 was not able to play the role as support, and a short-lived consolidation period just beneath it materialized.
This phase offered the bulls enough optimism to drive the prices higher, almost conquering the 0.6746 level. But that was followed by a depreciation that went past the aforementioned consolidation phase.
The price is now just under 0.6705. As long as this level keeps its role as resistance, lower prices are in the cards.
Only if 0.6705 becomes support, the 0.6746 may be paid a visit. Even so, once at 0.6746, the bears could join the market, as the better price will be more attractive for both short-term and long-term perspectives.