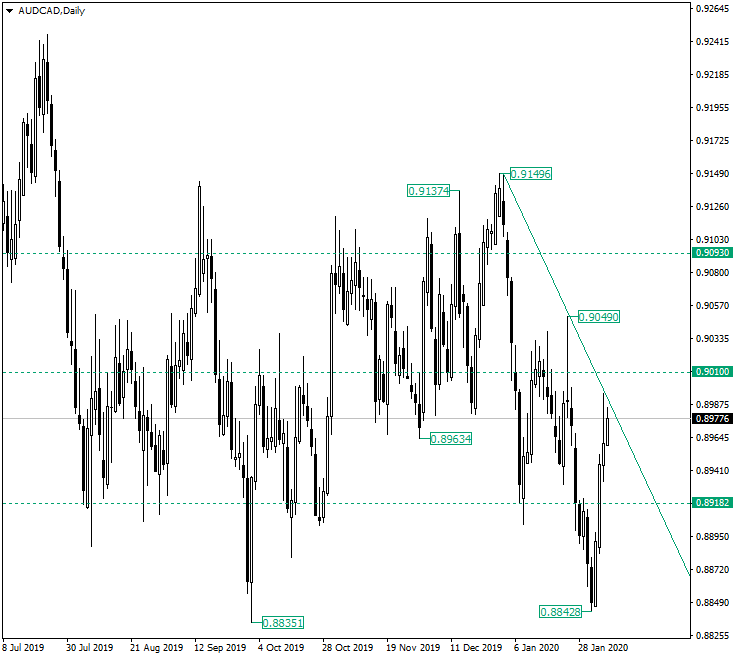 The Australian dollar versus the Canadian dollar currency pair is at a very interesting spot.

Long-term perspective
After printing the high of 0.9149, the price retraced under the 0.9093 resistance level and continued a descent that pierced the potential support of 0.9010 and extended all the way to 0.8918.
From 0.8918 an appreciation commenced, one that tried to conquer 0.9010, but ended up confirming it as resistance. In the process, a false piercing of the 0.9010 level took place, thus etching the high of 0.9049.
This was followed by a new downwards pointing leg, one that broke the 0.8912 support and impressed the low of 0.8842. After that, a new appreciation came into being and went above the pierced level.
The last swing seems to be testing the resistance trendline that results by uniting the highs of 0.9149 and 0.9049, respectively.
If the line gets confirmed as resistance, then it would send the price towards 0.8918. From there, two things could occur. The first is for the level to keep serving as support. This would lead to the formation of an inverted head and shoulders, with January 8, serving as a first shoulder and the low of 0.8842 as the head. In such a scenario, the bulls are expected to try and push the prices towards 0.9010, which represents their first target.
The second possibility is for the 0.8918 level to give way. This may very well be succeeded by the confirmation of 0.8918 as resistance, which in turn opens the way to 0.8842 — a first profit taking area — and then to the 0.8800 psychological level — not highlighted on the chart.