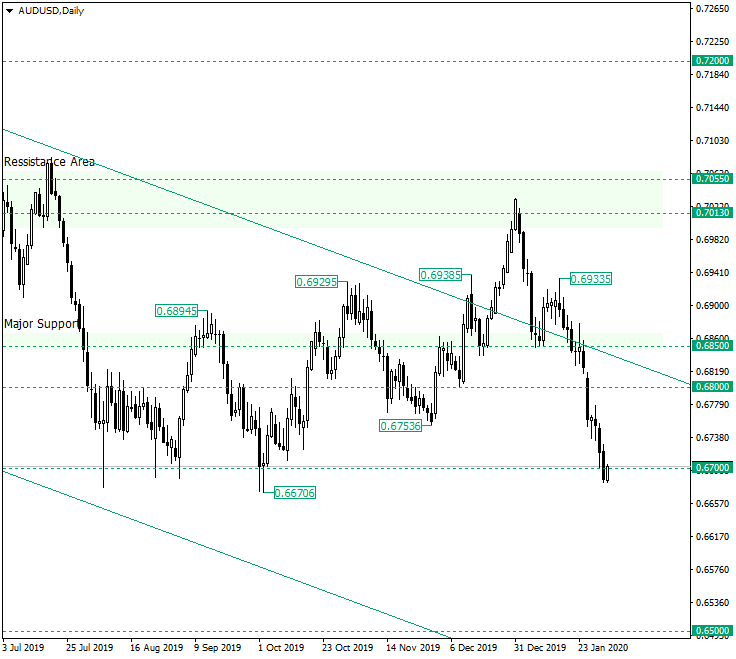 The Australian dollar versus the US dollar currency pair dropped sharply. Is it now the moment to expect profit booking?

Long-term perspective
After the price went under the neckline of the head and shoulders pattern marked by the peaks of 0.6983 and 0.6933, respectively, a strong depreciation came.
The reasons behind this are represented mainly by the impossibility of the bulls to keep the price above 0.6850, which in turn is a major support, and by the fact that oscillating under 0.6850 also meant getting back under the resistance trendline of the descending channel. In other words, the alignment between the formation of the head and shoulders pattern and the price passing beneath a strong double resistance area proved to be a powerful catalyst for the fall that began on January 24 and reached the 0.6700 psychological level.
Noteworthy is that the extension projected by the head of the reversal pattern reached its maximum. So, as the movement is now consumed — at least theoretically — the question is now if we are on the horizon of seeing a new appreciation.
Irrespective of the answer, from this point onwards, any appreciation is a new opportunity for the bears to join forces. This is valid as long as the price finds itself under the aforementioned double resistance area.
So, if from 0.6700 the price prints an upwards leg, even if it may be a good opportunity for the very short-term buyer’s perspective, then 0.6800 should limit it, thus triggering bearish interest.
If the price departs from 0.6700 towards the south or consolidates under it, then — as long as this level keeps its role as resistance — the bearish profile remains.
The target for this context is represented by the 0.6500 psychological level.

Short-term perspective
The price is in a downwards pointing movement that shows a lot of determination. As a result, slight corrections are to be expected, but the main trajectory leads to lower prices.
Such correction may be limited by 0.6746 or the 0.0 level of the Fibonacci retracement. The bears are aiming for 0.6600.
Only if the bulls manage to conquer 23.6, then the situation would turn neutral.