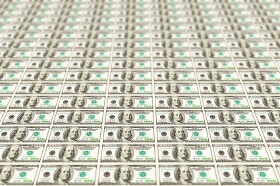 US Dollar Loses Against Rivals Despite Stellar Jobs Report

The US dollar is losing against some of its major currency rivals at the end of the trading week, despite the US government reporting better-than-expected jobs numbers for December. The greenback is looking to maintain the momentum it had in 2018 when it recorded its best annual performance since 2015.

According to the Bureau of Labor Statistics (BLS), the US economy added 312,000 new jobs last month, beating median estimates of 182,000. While the jobless rate rose from 3.7% in November to 3.9% in December, experts say that more people are entering the workforce searching for employment opportunities.
The Department of Labor said that the biggest jobs gains were located in education and health services (82,000), hospitality (55,000), construction (38,000), manufacturing (32,000), and retail trade (23,800).
It was reported on Friday that the average wage climbed 11 cents, or 0.4%, to $27.48 per hour. This brought the 12-month rate of hourly wages higher to 3.2%.
In total, the US economy added 2.64 million jobs in 2018. This represents the greatest overall gains in a single year since 2015.
In other data, the Institute for Supply Management (ISM) reported that its factory activity index slumped to 54.1 in December from the previous monthâs 59.3. This is below the market forecast of 57.9 and it represents the steepest decline in a decade. The numbers suggest that slowing factory activity might lead to sluggish economic growth.
Meanwhile, with the US government shutdown now becoming the second-longest in 20 years, neither the equities market nor the buck appears to be affected. The only difficulty for investors is that aspects of the federal government are not releasing important data that can drive the futures market. President Donald Trump and the Democrats do not seem to be making concessions on funding for the border wall.
That said, the White House does not seem to be endearing itself to US companies as the nation approaches the halfway point of the 90-day trade truce between the worldâs two largest economies.
Kevin Hassett, the White House Council of Economic Advisers, told reporters:

It [is] not going to be just Apple. There are a heck of a lot of US companies that have sales in China that are going to be watching their earnings being downgraded next year until we get a deal with China.

The Federal Reserve is still lingering in the background, leaving investors wondering when the next rate hike will be. The central bank has penciled in two increases to interest rates in 2019, and the market is forecasting the next one in September. However, speaking in an interview with CNBC, Cleveland Fed Bank president Loretta Mester believes the Eccles Building could stop hiking rates if inflation does not rise this year, adding that the US economy is âin a really good spot.â

If we don’t see inflation picking up and we see the labor market staying reasonably strong from where we are now, that may tell us we’re not neutral.

The economy is going to be telling us where we are.