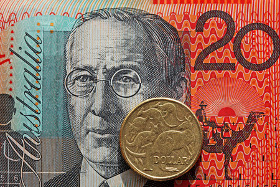 The Australian dollar rose against most of its major rivals, though not against the euro, after Australia’s consumer sentiment improved. The gains were limited, though, as the central bank’s head confirmed that an interest rate hike is unlikely in the near future.
The Westpac Melbourne Institute Index of Consumer Sentiment rose 0.3% in June from May. The increase followed the 0.6% drop in the previous month. The report commented on the result:

The consumer mood has shown a clear improvement in 2018, the first half of the year marking the best run of sentiment reads since 2014. That said, the Index has not built on the gains seen at the start of the year and remains well below the levels typically associated with a robust consumer. While there has been a clear lift in confidence around the economy, this has had a muted impact on views around family finances, which remain downbeat.

Philip Lowe, Governor of the Reserve Bank of Australia, delivered a speech today, demonstrating an optimistic outlook for Australia’s economy:

Subsequent to the Board meeting, the national accounts provided confirmation that the Australian economy is moving in the right direction. If this continues to be the case, it is likely that the next move in interest rates will be up, not down.

Yet he also stated that the hike will not happen soon:

Any increase in interest rates, however, still looks to be some time away.