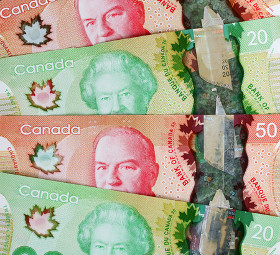 The Canadian dollar dropped against its most-traded rivals today. That was puzzling considering that the employment report released during the trading session was good and crude oil prices rose.

Automatic Data Processing reported that non-farm employment in Canada increased by 32,676 in February from January. Looking closer at the details about specific sectors, the biggest increase was registered in education and healthcare, while manufacturing showed the biggest decrease.

Prices for crude oil rose more than 0.3% today. Usually the loonie follows moves of oil prices, but today that was not the case. Some analysts explained that by dovish remarks from Bank of Canada Governor Stephen Poloz earlier this week. He said during his speech on March 13:

We will remain cautious in considering future policy adjustments and dependent on incoming data to guide our assessments.

The market interpreted the words as a sign that the BoC is not in a hurry to raise interest rates further.