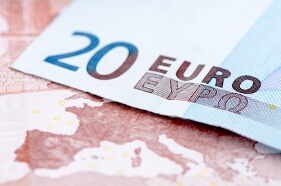 The euro fell against the US dollar intraday but has managed to recover by now. Against other majors the shared 19-nation currency was mixed, rising against the safe currencies, like the Japanese yen, but falling versus the Great Britain pound. The major driver for the currency were European election on the weekend.

Angela Merkel secured her fourth term as German Chancellor after the Social Democrats voted for a coalition deal with Merkel’s conservatives. News from Italy was far less positive as the parliamentary election resulted in an inconclusive outcome because no party gained clear majority. With many seats won by populist anti-establishment parties, chances are that rift in the European Union will deepen as anti-EU forces gain strength.

As for macroeconomic data, there were plenty reports released on Monday, and unfortunately almost all of them were disappointing. The Markit Eurozone services PMI fell from 58.0 in January to 56.2 in February according to the final estimate. The Sentix investor confidence index for the eurozone dropped 31.9 in February to 24.0 in March, largely in response to the announcement of tariffs by the United States. Eurozone seasonally adjusted retail sales fell 0.1% in January. All the mentioned indicators came out below expectations.