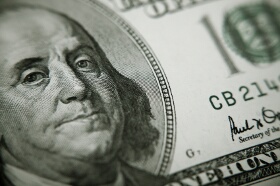 US Dollar Weakens Against Euro as GDP Data Disappoints

The US dollar declined against the euro on Friday, following a report that showed that the rate of economic growth in the United States failed to impress investors. The greenback fell harder against its Canadian counterpart as gross domestic product of the United Statesâ northern neighbor grew faster than expected.

In its first estimate for gross domestic product in the second quarter of 2017, The US Bureau of Economic Analysis stated that the US economy grew at a rate of 2.6%. The growth rate came close to analyst expectations of 2.7%, which let down investors who hoped for a better growth in the second quarter.

The final reading for gross domestic product in the first quarter was 1.2%. The bureau releases three estimates for each quarter, with a one month gap between each release and the next.

A separate report failed to support the greenback today after revealing a marginally stronger consumer confidence than expected. The University of Michigan said that its consumer sentiment index had a reading of 93.4 in July, which compared to estimates of 93.1.

On the other hand, the Canadian dollar surged against the US peer as Canadaâs economy grew faster than forecasts in May. Statistics Canada stated in a fresh report today that gross domestic product rose 0.6% in May, exceeding estimates of a 0.2% increase.