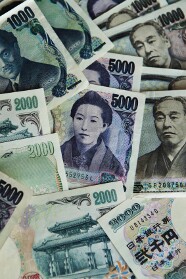 The Japanese yen fell during the current trading session following the barrage of economic reports in Japan today and yesterday’s policy meeting of the Bank of Japan.

Plenty of reports were released from Japan today. Among them were Japan’s core Consumer Price Index, which rose 0.2% in March from the previous year (in line with expectations), and Tokyo core CPI, which fell 0.1% in April from a year ago (less than analysts had expected — 0.2%). Household spending dropped 1.3% in March, year-on-year, much more than was forecast by experts (0.6%).

Yesterday, the Bank of Japan announced that it kept its monetary policy unchanged, surprising no one. The central bank upgraded Japan’s growth announced, but the inflation outlook remained weak.