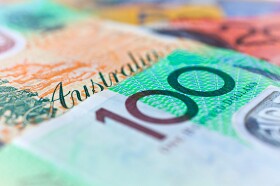 The Australian dollar dropped today, falling for the third straight day against its US counterpart. The reason for the decline was the inflation report that missed expectations, even though the disparity was minimal.

The Australian Consumer Price Index rose 0.5% in the March quarter from the previous three months, the same as in the December quarter. Markets had expected a bit faster growth by 0.6%. While markets considered the data to be dovish, analysts do not expect the Reserve Bank of Australia to cut its interest rates, though a hike is also very unlikely.