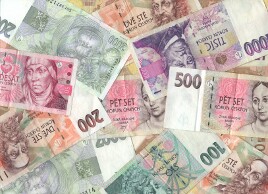 The Czech koruna continued to appreciate after the nation’s central bank had removed a cap on the currency last week.

It is no surprise to see the volatility of the koruna to increase after the Czech National Bank scrapped the ceiling of CZK27 per euro even though the decision was much better communicated to markets and was far less shocking than the similar move by the Swiss National Bank. Analysts expect the currency to continue appreciation, but it is hard to tell now how higher the currency can go, especially in the current risk-off environment. Meanwhile, Czech inflation rose to 2.6% in March, year-on-year, staying above the central bank’s target of 2%.

If you have any questions, comments or opinions regarding the Czech Koruna,
feel free to post them using the commentary form below.