Could OPEC Push Oil Back to $90? What Do the Charts Say?

This article was written by David Belle, a contributor at .

Oil has had a very tough time over the past few years after dropping from its 2014 high of
$106.60. Trump’s new policies are pro-US oil production, and expansionary towards furthering fracking, which is more efficient and with recent comments coming out of Saudi Arabia, the Saudis don’t seem to want to curb production.

However, there is a meeting at the end of November where an agreement could be met regarding a production curb, with Iraq leading the proposal for the curb. The biggest aspect here though is the sway that Putin may have over this meeting. Putin has also said that he is partial to a production curb and ‘sees no reason’ why an agreement cannot be met (with Russia’s current involvement in the Middle East, you may start wondering whether it’s very convenient that he wants to raise the oil price, however that is slightly tin foil hat wearing time…).

This puts upward pressure on price in the longer term due to time lags in production and already pumped oil still having an effect on supply. Shorter term, however, a drop in oil prices could certainly occur, and we can possibly see why from looking at a few charts.

Below in the first chart we have WTI (USOIL) on the weekly time frame. I follow Wyckoff logic of sentiment changes in the market, which can be viewed by changes in volume and price action. The reason for this is because it implies heavy emphasis on market psychology stages via examining volume in combination with price action, which seems to be ignored quite a bit when reading analysis pieces.

Short term, I see the USD strengthening. This implies WTI would fall due to having an inverse relationship with the USD. It’s a pretty bold statement to say that it will get to $90, however I am simply basing this on past structures that I have seen and the potential for WTI to do the same. I evaluate at every phase to see whether the idea is still valid.

Shorter term, I am looking at the wedge structure break (red trend lines), but to the downside, where this usual structure would expect an upside break. This is because I feel a shakeout is due to the downside in order to rebalance demand and supply for the move up.

Price action rejection to the downside (big pinbars/wicks) above $30 as well as a volume pick up at these levels will provide ample confidence that we will head higher to break the 2016 highs and trade up to higher price structure at $70. Previously we have seen bullish accumulation at $28-$40 and it occurred again at the end of August at the $39-$40 range. We therefore know that bulls are in the market at these price levels. 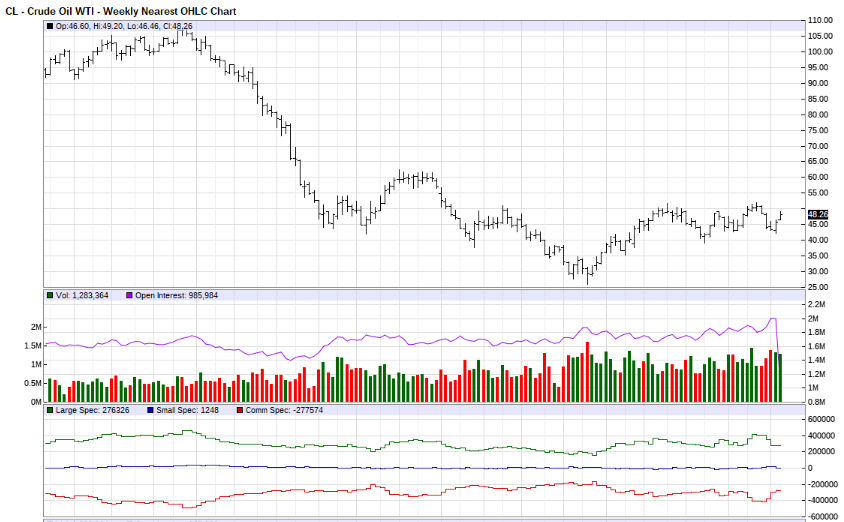 It’s too early to say, however open interest on crude Jan’17 contracts decreased by 1 million contracts the week before last. I say it’s too early to say because we had the Trump election and a shock to the market like this requires some time to restabilise sentiment. However, this could indicate a trend change with such a steep decline, as contract holders liquidate their positions.

What’s more, USD/CAD looks like it wants to push higher to 1.43/42, which would indicate a short term bearish oil market. USD/CAD and WTI have a strong negatively correlated relationship, since CAD is an oil backed currency and strengthens and weakens with the rise and fall of oil. We can also see a Wyckoff topping pattern forming here at these intra-year highs; I look for an area where bulls or bears were temporarily introduced while coming off of a major high or low respectively and then being taken out with the resuming trend reversal. This identifies an area of contention and an area that the market will be looking to retest. If we break above the highs at 1.468, however, this structure will be void and a reassessment will be made. Essentially, USD/CAD is facing the opposite of WTI with both exhibiting a Wyckoff top and bottom respectively.

Longer term, I see the dollar facing bearishness. Hedges on exchange rate risk on USD cross currency basis swaps will eventually become too expensive with this sustained USD rally. This can be seen in the LIBOR increase over the last year, There is a huge demand for USD to be able to purchase US government bonds which have an attractive yield, compared to German, UK Gilt or Japanese Treasuries, and so inevitably investors will shift focus from USD to elsewhere if they are unable to hedge this exchange rate risk at a preferential price. This could lead to rallies in WTI long term purely based on the negative correlation between oil and USD.

In addition, counter to economic theory about the exchange rate mechanism, the USD actually tends to be flat or fall after a rate hike. With this in mind, it could be that if we do get a hike in December, that the market will already have priced in this hike and we could see it fall off over the following 6-9 months. Furthermore, in the shorter term, end of year flows could see portfolio rebalancing. This would certainly indicate dollar selling where agents will seek to take some profits and reassess which would increase USD supply, weakening it.

I’ll be updating this in further articles due to the scope and timescale I am looking at this on, but it looks like the oil market could be in for a good time in 2017.