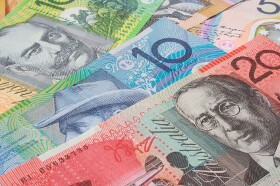 The Australian dollar sank against its major peers today. It is hard to say why the currency was so weak considering that economic data released from Australia on Wednesday was not that bad.

The Westpac-Melbourne Institute Leading Index showed slower growth in October than in September, but it still was not bad, and Westpac’s Chief Economist Bill Evans commented:

The October reading is the third consecutive above trend result and follows fifteen months of persistent below trend reads. Although the growth rate has slowed a little, it is still a clear positive signal for the near term economic outlook.

The Wage Price Index rose 0.4% in the September quarter from the previous three months, in line with expectations. The only negative indicator were new motor vehicle sales that dropped 2.4% in October on a seasonally adjusted basis after rising at the same rate in September.