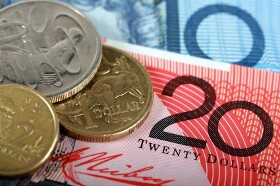 The Australian dollar was little changed after the release of the better-than-expected retail sales figure and the monetary policy statement from the Reserve Bank of Australia.

Retail sales rose 0.6% in September from August. The increase was bigger than the predicted 0.4% and the August’s revised gain of 0.5%. The RBA left its monetary policy unchanged earlier this week and said in today’s statement that “at its recent meetings the Board judged that there were reasonable prospects for achieving sustainable growth in the economy with inflation returning to the medium-term target over time and, hence, it was appropriate to leave the cash rate at 1.50 per cent.” As for the economic outlook, the central bank stated: