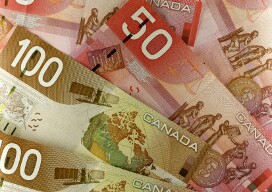 The Canadian dollar was mixed at the early trading on Friday. While the currency attempted to extend its rally versus the Japanese yen, it was trading virtually flat against the euro and the US dollar.

The Canadian dollar was rising for two days against the yen and is now attempting to extend its rally for a third session. The currency also gained for two sessions versus the euro but halted its advances as of now. As for the loonie’s performance against the greenback, the Canadian currency dropped yesterday against its US counterpart and is trading close to the opening level today.

Fundamentally, times are tough for the Canadian dollar. While crude oil, the major Canada’s export commodity, bounced a bit over the last couple of days, energy prices remain subdued. Additionally, the rally of the US dollar drains away strength from other currencies, including the Canadian one.