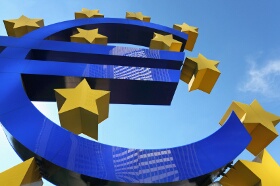 Euro continues to struggle, turning in a mixed performance today. The 18-nation currency is finding it difficult to maintain gains as concerns about the economy continue to rise. While the euro is turning in a slightly stronger performance against the US dollar today, it’s not likely to last.

The eurozone appears stuck in economic doldrums. The International Monetary Fund expects to see eurozone growth of 1.3 per cent in 2015 — leaving it behind as the global economy grows three times as fast. Concerns about the rise of populist parties in eurozone countries also have many seeing austerity come to an end, before sovereign balance sheets are fully under control. Greece is once again expected to present problems.

Some analysts have hope that the eurozone economy can keep moving forward, without falling into recession, though. There are hopes that lower oil prices and continued interference by the European Central Bank will help keep the worst of economic shocks from the 18-nation currency region. However, the things the ECB will need to do to keep the economy afloat are the very things likely to drag on the euro.