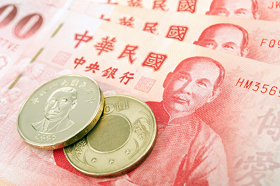 Taiwan Dollar Unable to Hold Ground vs. US Counterpart

The Taiwan dollar fell today on concerns that foreign investors will abandon local assets because of expectations of higher interest rates in the United States. Other currencies of emerging markets were also under pressure though some of them showed resilience.

Prospects for monetary tightening from the Federal Reserve made the trading environment unfavorable for riskier currencies. While some of them, including the Indian rupee, were able to resist the pressure, the Taiwan dollar was not among the lucky ones. Speculators were selling Taiwanese shares, driving the local currency down.

If you have any questions, comments or opinions regarding the Taiwan Dollar,
feel free to post them using the commentary form below.