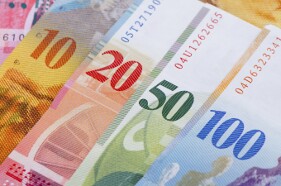 The Swiss National Bank made a surprise move yesterday, implementing negative interest rates. The Swiss franc sank after the decision though trimmed its losses as of now.

The Swiss National Bank (SNB) is imposing an interest rate of â0.25% on sight deposit account balances at the SNB, with the aim of taking the three-month Libor into negative territory. It is thus expanding the target range for the three-month Libor to â0.75% to 0.25% and extending it to its usual width of 1 percentage point. Negative interest will be levied on balances exceeding a given exemption threshold.

The move was not a complete surprise as market analysts were speculating about such possibility for a long time, yet the Forex market was not prepared for implementations of negative rates right now.

Unsurprisingly, the franc fell as the central bank cut borrowing costs and reiterated its commitment to keep the currency ceiling as long as necessary. Yet the Swissie pared back part of its losses currently. Some experts speculate that demand for haven and flight of capital from Russia to safe economies, including Switzerland, will not allow the franc to stay weak for long.