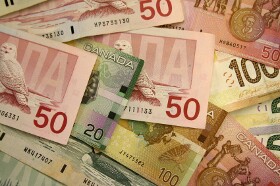 Canadian dollar continues to struggle in Forex trading, thanks in large part to falling oil prices. There doesn’t seem to be a bottom to the oil collapse, and the loonie is most lower against its major counterparts as a result of the oil weakness.

There isn’t much to support the Canadian dollar in currency trading right now. The Bank of Canada isn’t expected to raise rates anytime particularly soon, and oil prices are dragging on the economy and the loonie. Oil is very important to Canada, since it is a major commodity export. With the price of oil falling, and no end in sight to oil’s tumble, the Canadian dollar is unlikely to see a lot of success.

Even when there is some success to be seen, such as today’s gains against the US dollar, they are expected to be short-lived. Greenback is a little lower today against the loonie as Forex traders await the next FOMC announcement, but these losses aren’t expected to last. There is too much policy divergence, and the greenback moves inversely to oil, while the loonie moves with it.