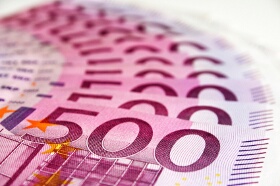 Euro Gets a Temporary Boost

Euro is heading higher today, gaining ground against most of its major counterparts, as commodities gain and as Forex traders consolidate previous positions.

Earlier, the euro had reached a two-year low against the US dollar, falling on expectations that the Federal Reserve will raise rates sooner rather than later. However, after reaching that low, things started turning around when Forex traders began consolidating their positions. Additionally, euro is also finding support as gold prices surge upward. It’s not a big gain for gold right now, but it’s enough to provide a little help to the euro.

Even though the euro is mostly higher right now, there aren’t expectations for long-term strength. There are too many concerns about the eurozone, and policy divergence between the 18-nation currency region and the United States is too great. Additionally, the ECB is expected to follow through with some drastic easing measures soon. All of this points to long-term euro weakness, rather than continued strength.  Now is more about repositioning than it is about anything else.