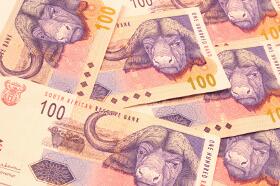 The South African rand dropped today, reaching the lowest level since 2008 against the US dollar, as the nation’s current-account deficit narrowed less than was predicted by analysts.

The current-account gap shrank to 6 percent of gross domestic product in the third quarter of this year from 6.3 percent in the previous three months. Specialists have promised a decline to 5.8 percent. This week should be important for the rand as Fitch Ratings and Standard & Poorâs will review South Africa’s credit rating on Friday.