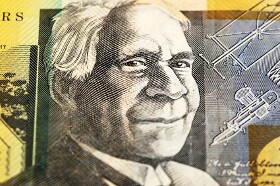 The Australian dollar was involved in a selloff last week, and it doesn’t appear that things are improving all that much as a new week begins. The Aussie is still just holding its own against major currencies, and the forecast doesn’t offer a whole lot in terms of encouragement for the Down Under currency.

Australian dollar is struggling today, but the selloff easing as the situation continues to look disappointing for the Down Under economy. A surprise slump in Australia’s GDP last week triggered a selloff, and the Aussie is still seeing the effects today as we start a new week. The news has many Forex traders looking to the future and speculating on what could be next. Many expect that the Reserve Bank of Australia will have little choice but to begin cutting its rate, perhaps as early as February 2015.

Also weighing on the Aussie has been the recent performance of gold. Even though gold is a little higher today, it is still below $1,200 an ounce and has bee struggling. The Australian economy is also reliant on China, and with a Chinese economic slowdown, the Aussie is affected.