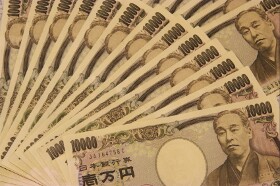 The Japanese yen fell today against other most-traded counterparts. The currency fell yesterday below the 120 per dollar level for the first time since July 2007. The yen also touched the lowest level since October 2008 versus the Great Britain pound.

It is widely expected that the Bank of Japan will keep its extremely lose monetary policy for a long time and may expand the stimulus program even more. At the same time, the general consensus is that the Federal Reserve and the Bank of England will start monetary tightening in not-so-distant future. The divergence between the policy outlooks led to the current decline of the yen.