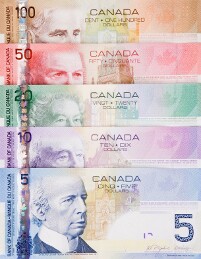 The Canadian dollar rallied on Wednesday after the Bank of Canada kept its monetary policy unchanged. The currency fell on Thursday and continued to move down during the early Friday’s session, though it did not erase its Wednesday’s gains completely.

The BoC decided to keep its key interest rate at 1 percent. The central bank said in the statement that “Canada’s economy is showing signs of a broadening recovery”. Yet the bank also mentioned that “weaker oil prices pose an important downside risk to the inflation profile.”

It is possible that the drop of oil prices is exactly the reason why the currency declined after the initial rally. The Canadian dollar fell even though the Purchasing Managers’ Index demonstrated a huge increase. There are some experts who argue that the performance of the Canadian currency is not as strongly tied to oil prices as it is usually considered.

There is couple of important economic reports from Canada that are scheduled on Friday and that may impact the loonie. Namely, employment data and the trade balance are the indicators that traders should watch for.